When I was a baby I was given a doll I called Jemima. She looks nothing like the Jemima on Playschool, but she has pigtails so that's her name. We used to lie in the hallway in warm patches of sun on sunny mornings - Jemima would stay in the shade though because her tan was already well developed. Jemima loves eating vegemite toast. When Big Owlet was 1 year old, I made her a Jemima. She has red hair, coat and shoes and pink and white stripy legs. Fortunately she doesn't like vegemite toast! I think it'll be time to make a Jemima for Little Owlet soon... wonder what she'll look like? 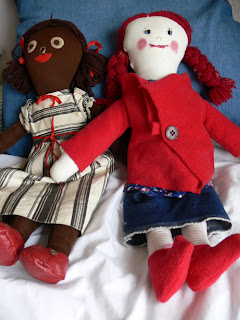