Pinch and a punch for the first of the month! Putting on a political hat for today, so excuse the break in regular programming. Did you know that in exactly one year from today it will be illegal to have a homebirth with an independent midwife in attendance? Do you know why? Because the Australian government has just passed down a draft legislation which will make it illegal to work uninsured and independent midwives are not covered by insurance or medicare. Pretty dumb huh? It seems so to me, Swayer and our owlets. We'll be attending a rally in Canberra in September to try and get our voices across. Tricky to do when you are a minority, but as this issue is about more than just homebirth, but a woman's right to make an informed choice over where she births and who is there, it involves everyone. I'm hoping we can make a difference so that when our owlets are feathering their own nests, they can choose where and how they'd like to birth...

So why do we care so much? I'm going to get personal now and tell you about how the owlets made their way into the nest... The big owlet was born in a private hospital. We had seen our private obstetrician for uneventful 10-15 minute meetings once a month and on the last visit she told me I'd need to be induced because my baby was a week late and she had elective cesareans booked for the remainder of the week and me going into labour naturally would be inconvenient. For her. So I agreed, and after a relatively short but extremely intense labour, she was born. How I avoided the cascade of intervention spiralling into a catastrophe, I don't know. The doctor made it back from shopping for a handbag, just in time to catch her. She was perfect and after a quick feed she was whisked away to another part of the hospital for weighing, tagging and testing. Swayer went too. I was alone for a while. My Mum stayed and watched me shower. I felt bloated, exhausted, torn, puffy and weird. The photo below shows how my big owlet felt... more than weird. Cold, alone, freaked out by the gloved hands holding her like she's a cat or something... 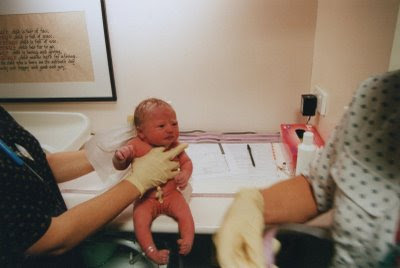 The week that followed was all about Swayer, me and the big owlet trying to figure out how to be a family and fit that in around the procedures and schedules of a hospital. What had been a simple breastfeeding relationship turned into a confusing and painful one as midwives on shift changes came to offer differing advice... We didn't begin to bond until we arrived home. When we left the hospital we felt like we were stealing her and super naughty for WALKING WHILE HOLDING HER!!! The whole week seemed bizarre and my underlying thought was "but why am I in a hospital if I'm not sick??"

So skip forward to 2006. Little owlet was on the way and we wanted a different approach. One that felt more natural and included Big owlet as much as possible. We met with an independent homebirth midwife for an hour visit each month, more towards the end. She got to really know us and our environment. We felt confident in her abilites and experience, should anything go wrong, which is actually rare in a space where a woman feels supported. Little owlet was born at home, underwater, ten days after her "due date". Her sister was watching while Swayer caught her and handed her to me. It was one of the most simple, uncomplicated, magical events of all of our lives. I felt energised, normal, strong, content. We were supported by two brilliant women, the midwife and my Mum, who kept a close eye on us while we went about our lives and got on with being a family in our own space. Here's a little montage of the moments around her birth and babymoon. So different. I'd do it all over again in a heartbeat...

I'm writing to the Minister for Health, Nicola Roxon, as well as my local MP. I'm also attending the rally with my family and signing an online petition. What will your do?
Labels: owlets, ranting